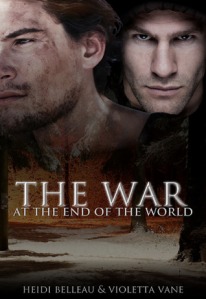 We want to highlight some fantastic free works for readers, especially if they’re looking to sample work by authors attending GRNW 2014. So, we’ll be featuring (hopefully weekly!) selections of free reads that you all can check out. 🙂

War correspondent Joseph Byrne has been cheating death all his life, ever since he spent two years in an iron lung as a boy diagnosed with polio. In the years since, the Fetch, a strange being charged by Death with collecting Joseph and transporting him into the unknown, has been condemned to watch and wait.

Now, with Joseph working in a Finland caught in a tug of war between Nazi and Soviet forces, it seems a foregone conclusion that the Fetch’s sentence is at its end and Death will have Joseph for her own at last. Joseph, an openly Jewish American, has no doubt where his allegiance lies, no matter the danger. But after all these years at Joseph’s side, watching him overcome adversity to grow into a brave and principled young man, the Fetch has come to realize that there are forces stronger and so much sweeter than even the purpose you were made for.

Visit Storm Moon Press to download it for free!

After a decade, Stephan is back in town, his brutal hunter’s gaze searching for prey. When he runs into Red in a bar, Stephan is mesmerized. Years ago, Red had been a skinny boy, doing his best to protect himself from the big bad creatures of the city. Now, he’s all grown up and has been waiting a very long time… for Stephan.

Visit the M/M Romance Group’s site to download it for free!

Deadman and the Lustful Spirit by Lou Harper

Denton is a necromancer and his boyfriend Bran is a witch. It’s not as exciting as it sounds. They don’t even get to dress the part, unless it’s New Year’s Eve and they’ve been invited to a costume party. Denton is happy to let his hair down, but coaxing the reclusive Bran out of his shell is hard enough without a demonic spirit crashing the party.

Convincing the spirit to return whence it came from will call on Denton’s special skills, but not in necromancy.

Grab it for free at Smashwords.

Since being assaulted, David must struggle to control the beast within. But the killer stalking David’s lover may leave him no choice but to embrace his dangerous nature.

And you can always find more in our free reads shelf in the GRNW GoodReads group!