This is a re-posting of an essay Tracy wrote for the genre blog Reviews by Jesswave that was published on October 15, 2013.

On September 14, 2013, more than 120 attendees joined the Gay Romance Northwest Meet-Up at the Seattle Central Public Library, the first conference on LGBT romance fiction in the Pacific Northwest. The event was hosted by the Seattle nonprofit Old Growth Northwest, which focuses on fostering community and building resources for authors around the Pacific Northwest. I served as the event coordinator for GRNW (on a volunteer basis. GRNW is entirely volunteer-run. For the record, I’m speaking here as myself, and not for Old Growth.)

The conference itself was a one-day event–an afternoon with three panel discussions with authors, editors, publishers, and cover artists that talked about topics like writing gay romance, what publishers are looking for, and diversity (or lack thereof) in LGBT romance. Following the conference, we went across the street to the Hotel Monaco where attendees could meet with authors and readers, buy books, have books signed, and listen to short readings.

We call GRNW 2013 a success overall, especially for our first year.

1- The event went great, with only a few hitches (e.g. like us at registration forgetting to give out swag bags for the first 60 attendees. It was a hilarious scramble as conference volunteers ran up to pass out bags to the audience members.)

2- Due to writers, publishers, and attendees’ generous donations, both before and during the conference, we gathered more than 240 LGBT books in our book drive for the Gay City LGBT Library, a nonprofit library in Seattle that’s open to the public.

3- As seen in Marlene Harris’ earlier posting about working with libraries, during the month prior to the conference, the Seattle Public Library purchased 240 LGBT romance ebooks for the library collection, including books by most of the attending authors. We were very proud that SPL took such great and immediate measures to expand their collections.

(It’s just coincidence that the number of Gay City book drive donations matched the number of SPL additions, although we’re very happy that in total almost 500 LGBT books were added to the Seattle community this summer.)

We got a lot of positive feedback as well as wonderful suggestions from attendees for next year (and yes, there is a next year—GRNW 2014 will be back at the Seattle Central Public Library on Sept. 13, 2014.)

After running this event, I learned a lot of things. If I had to step back in time to talk with April 2013 Tracy, which is when this event idea was born, these are some of the things that I would share:

Writers, Sponsors, and Partners will get on board 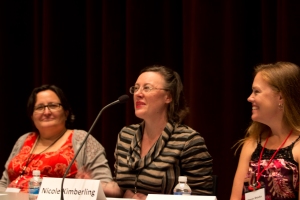 Prior to this event, we did not have connections with any of the authors, sponsors, or partners. All connections were made in those five months. The hardest thing was to reach out and ask them to join. (It’s kind of scary—asking a stranger if they’d like to believe in your idea.) But everyone was so positive and enthusiastic to be a part of this, even though we were not a known entity or part of the industry.

So, I say this to anyone who is interested in doing something similar—push past your fear of asking. Some will say no, and some will ignore you, but most of the people you will talk to are wonderful, caring, creative, and positive people, and they will be a joy to work with.

Partnerships are valuable, even if they can’t support you financially

GRNW and Old Growth Northwest worked with 11 community partners on this event, from the geeky convention GeekGirlCon to the prestigious Lambda Literary to two RWA chapters, the Rainbow Romance Writers and the Rose City Romance Writers. These kinds of partnerships are great for outreach, building connections, building awareness, and tying your fiction event more into the community.

There are so many great reasons to spread the love of LGBT romance fiction, and connecting your event to local LGBT, arts, and writing nonprofits is a great way to extend your reach and build awareness of the genre.

One of our partners was an independent bookstore which handled all the ordering and bookselling for the event. The bookstore was wonderful to work with, but we definitely ran into conflicts, and it’s one of those, “it’s no one’s fault” kind of issues. Both independent publishers and bookstores have policies in place, and they don’t always work together. For example, some presses don’t allow returns. Book stores will only buy books that can be returned. Both sides are in a financial standing where one can’t overcompensate for the other without losing money.

This isn’t the fault of the independent press. They’re putting themselves out there and taking a big risk by being independent. Nor is it the fault of the store. As we can see by the dwindling numbers of brick-and-mortar bookstores, they can’t afford to take on financial risks either.

But our goal for next year is to continually look for new ways to make the process easier—for stores, for presses, for authors, and for readers. Because even though the majority of the market is ebook-driven, there is still real joy in being able to flip through these books at a store. Our goal is to see how we can make that even easier.

You will run into bigotry, prejudice, and elitism

Focus on the good parts and all the positive people that you’re working with. So when someone tells you that they don’t serve “those kinds of customers” or tells you derisively that they don’t “read those kinds of books,” you can respond professionally back to them. It will happen, because not everyone is at the table with LGBT, romance, or LGBT romance.

Just smile and tell them that there will always be a spot at the table for them when they want it.

What more can be done – GRNW Call to Action

One of the main points we made at the conference was that there are so many little things that readers and writers can do to help boost awareness of the genre, and part of our purpose was to live by example and show how one can engage to make things happen, whether you’re  a reader or a writer.

– If your library has books already, borrowing them. (That’s one of the best ways to show a library that there’s demand.)

– Working with book stores, libraries, and related nonprofits to host author events. (This is especially easy in urban areas where you can gather multiple authors for one event.)

– Attend local LGBT romance events in your area. (Getting attendees at events is how more events happen. Nothing shuts down an initiative faster than a visible lack of interest.)

– Participate in conventions and events—whether it’s the genre flagship event of GayRomLit, this spring’s RainbowCon, this summer’s UK Meet 2014, the LGBTQ track at RT 2014, next fall’s GRNW 2014 or Yaoicon 2014, or organizing an event or panel with your local RWA chapter, nothing stops silence more than going out there and publicly celebrating.

Celebrate. Celebrate lots and lots. Because whether you’re a writer or a reader, you’re worth it, and so are these books.

One of the last points we ended GRNW was this:

We don’t need to wait for mainstream publishers to tell us that these books are valuable.

We can do that ourselves.

With all these little ways, we can announce with our actions about the books that we love and the authors that we admire.

We’ll be right there doing the same. We’d love for you to join us.

Tracy Timmons-Gray has a background in nonprofit project management, development, and communications, and is an avid LGBTQ romance reader.