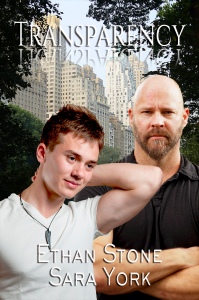 At our January 2014 Portland LGBT Romance Reader Group Meeting, we got the chance to talk with GRNW author Ethan Stone about his 2013 trans* romance story Transparency and about how well it was selling.

The story’s success seemed to counter arguments that there isn’t much of a market or demand for romances with trans* and gender queer characters, so we wanted to sit down and chat with him and coauthor Sara York about the story.

What prompted you both to write Transparency?

Ethan: The idea originally came to me at the GRNW meet up in Seattle. Several people said that there was a lack of stories with trans and lesbian main characters. The idea of writing a trans man started percolating in my brain.

Sara: I’d been thinking of writing a trans story but I didn’t really know where to start. When Ethan mentioned writing one together I said yes immediately.

Did you do research to help prepare?

Sara: I did do some research on female to male transfers. There seems to be a lot of misunderstanding of transpeople. The reasons to change are as varied as the people themselves. Both MTF and FTM are individuals and want to be treated as such. I found that there are some basic rights that are missing that need addressing. It’s difficult for understanding to come to the mainstream if we don’t talk about some of the issues.

When you published Transparency, how was the response after?

Ethan: I was very pleased with the reviews and comments we got. I didn’t hear any negative comments about the story itself, except that it wasn’t long enough.

Sara: I’m very happy with the reception. I will be looking to include more trans stories in my books.

Sara: Sales far surpassed my expectations. We really had no idea how many people would be interested in reading about Charlie and Taylor.

Ethan: I have been absolutely blown away by the sales. I think it’s amazing that so many people have read it.

Do you have any recommendations for other writers who want to write stories that focus on trans* characters?

Sara: Do some research and look at the community. Write from the heart, not just because you want to write a character for the novelty of it.

Ethan: Don’t be afraid to write it if you want to. Don’t let the idea of bad sales keep you from doing it. I think there is an audience for trans* romances. If the story is done right it will speak to all audiences. Some people may feel that because the character doesn’t have a cock he can’t be considered a gay man. However, it’s not the outside that matters, it’s the inside. Taylor is a gay man who happened to be born in a female body. He had surgery on his upper half but not on the lower half. This is a decision every trans* person has to make for themselves. The fact that Taylor doesn’t have a dick doesn’t make him less of a gay man.

Ethan Stone is becoming a duck once again. After more than a decade away from the soggy state of Oregon, he is back in his home state. He used to have a day job where he wore a sexy uniform to work; now he can wear whatever he wants to work as he attempts to see if this writing thing can support his Mt. Dew addiction. Visit Ethan at his website!

Sara York enjoys writing twisted tales of passion, anger, and love with a good healthy dose of lust thrown in for fun. Almost a quarter of a century ago Sara met her lover, falling for him after knowing him for ten minutes. Sara’s passion for him comes out in her stories, mixing with her passion for life, love, and good times, flowing onto the page and becoming tales from the heart. Visit Sara at her website!