Another installment of Free Reads Friday, and another chance to share some free reads by GRNW authors! 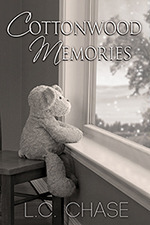 For Brandon going home isn’t easy, but in order to move forward with his life with Zach, he needs to pay a visit to his first love, Avery.

This free short story was sparked by a photo prompt from a dear friend. In the photo, a young man is sitting by a window wearing nothing but a pair of superhero underwear and glasses. In his hands is a ragged teddy bear. I wondered, what is he thinking, and what does that little bear remind him of? And so began Cottonwood Memories.

Delivery with a Smile by Megan Derr

Jack worked hard to obtain a normal life. He might not love it, but it’s better than the criminal life he left behind—even if it cost literally everything, and he really does hate being a damned delivery man. On the bright side, his route includes a friendly old lady who makes the world’s best cookies and regales him with tales of her hot, jet-setting son. Normalcy definitely has perks.

Then he walks in on her and her son arguing with men at gunpoint.

Visit Less Than Three Press for the free download!

Nikhil “Nik” Larson is a snarky, dark-skinned adoptee from India who grew up in the Whitest Town in America. Back to visit his parents Nik meets Trooper Jurgen Dammerung, a blond, butch motorcycle cop who’s so hot he leaves a con trail wherever he goes.

Jurgen is the epitome of everything Nik hated about growing up the lone Indian boy among a town of white people. But Jurgen surprises him rather (ahem) pleasantly, in spite of — or because of — Nik’s attempts to needle him. By the end of his visit, Nik realizes he likes Jurgen. But Jurgen’s so not the relationship type.

Visit All Romance Ebooks to download it for free!

And you can visit the GRNW Free Reads shelf on GoodReads to find even more free reads!